An I.J. Martin & Co client is now World Bank President! Our fingers were crossed when President Obama nominated Jim Yong Kim to be the next President of the World Bank. On 17th April, he was officially elected. Jim first became our client when he was Director of the HIV/Aids Division in the World Health Organisation in Geneva. Despite restricted funding and limited leadership resources, Jim’s ‘3 x 5’ Campaign to offer antiretroviral drug treatment to 3 million more infected people around the world was a huge success. Congratulations and best wishes in your new role, Jim! 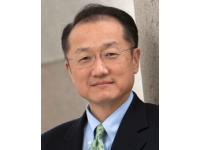